This dessert is so versatile and is suitable for both winter or summer. Serve the pear and pudding with vanilla ice cream on a warm day. For a cold winter’s day it can be served with a chocolate sauce and or thin custard. Very easy to make with the minimum of fuss using everyday store cupboard ingredients.

½ cup juice of the canned pears

Preheat the oven to 190 degrees Celsius. Grease a 20cm square dish with the butter. Arrange the pear halves in the dish, cut side down. In a large mixing bowl, mix all the ingredients together using an electric mixer. Pour the mixture over the pears. Bake in the preheated oven for 30 minutes, it will be slightly gooey when baked. Cool down slightly before cutting into squares, serve with thin custard, chocolate sauce or vanilla ice cream. Cut into approximately 9 slices.

Arrange the pear halves in a greased oven proof dish

Pour the chocolate mixture over the pears

Break the chocolate into small pieces. Microwave in a suitable bowl for about 1 – 2 minutes, checking every 30 seconds on its progress until it is melted. Heat the cream, butter and sugar over low heat until the butter has melted and the sugar has dissolved. Pour the cream over the chocolate and stir well. Serve with the pear and chocolate pudding. Delicious serve whilst still warm. 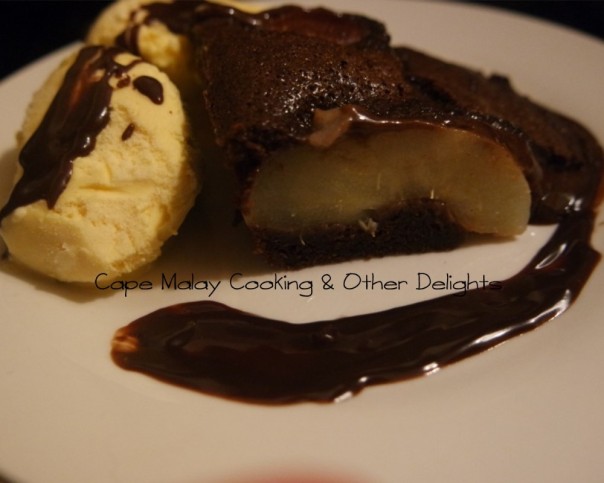 About Cape Malay Cooking & Other Delights

Cape Malay Home Cooking made easy. The Muslim community has also had a large influence on the cooking of South Africa. Cape Malay cuisine is delicious. It usually consists of a combination of fruit, spices, vegetables and meat. Using my cooking know how to inspire everyone to cook the food they love. Here you will find tried and tested simple and delicious recipes for relaxed home cooking that go far beyond baking. From easy soups and roasts to delicious breads, deserts, stews, etc… All the recipes seen here are prepared in my kitchen with photos taken by my family and me. So please don’t expect professional photography or styling, it’s just the way we have our meals on a normal day! My motto is: "Give a man a plate of food and you've fed him for the day. Teach a man to cook and you feed him for a lifetime" - Cape Malay Cooking & Other Delights Facebook@www.facebook.com/capemalaycooking https://capemalaycooking.wordpress.com/ https://twitter.com/CapeMalayCooks www.youtube.com/capemalaycooking
View all posts by Cape Malay Cooking & Other Delights »

This site uses Akismet to reduce spam. Learn how your comment data is processed.